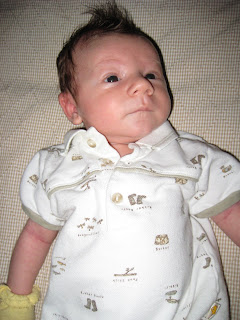 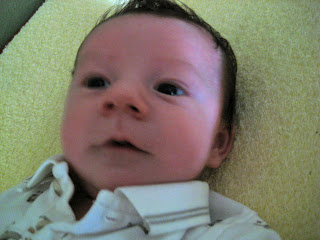 I'm one month and Proud! 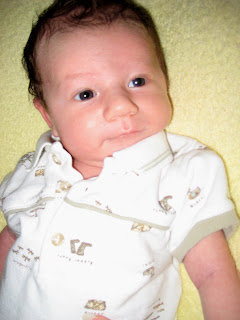 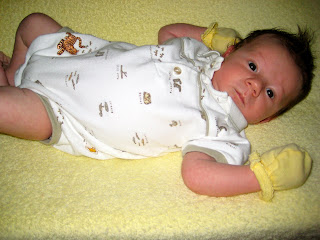 I look hot in mittens, don't I? 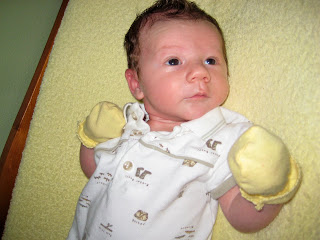 Ephraim is one month old today! I can hardly believe it! Of course, I will have a photo shoot today and post the pictures up here eventually!

Well, I think the guests are coming at a slower pace now. We still have people visiting, but they are spread out a little more. Momma is super tired still and so is daddy. Little guy is still up a lot at night--its kinda hard to get anything done around the house!

Ephraim's photo shoot is up online here: www.photographybymichelle.com Click on the client previews section and enter Ephraimnb to see his cuteness! I love love love the pics with him looking at daddy!

Although its a short one, its a good one! I hope you can view the pics! Don't delay! He is already growing up even more! I'll post again this week.....if he lets me!
Posted by Stephanie at 3:17 PM 3 comments:

I'm trying too hard by attempting to write my blog ahead of time and making it all perfect. I mean, that IS the point of a blog of this kind, right?

Ok, so Ephraim is three weeks old and I can hardly believe it. Seriously, he has grown already and just so darn cute! He loves to sit in his swing (and fall asleep), play with Daddy during tummy time, and be held all the time : ) We spend lots of time together since he eats every 1.5-3 hours and is a big eater!

So far, he has peed on mommy about 3 times and pooped once. It was quite a week! We took him to Tremont for his newborn photos on Saturday. It was his third car trip, but the longest one (first was home from hospital, second to the doc). He slept like a champ and was super cute in his photo shoot! We will get a link from http://www.photographybymichelle.com with a password to see his pictures in about two weeks.

We've had so many family members and friends bless us with their time, cleaning skills, cooking abilities and love. We are happy to say that Ephraim is loved by them all, too.

A couple of cute pics are below... 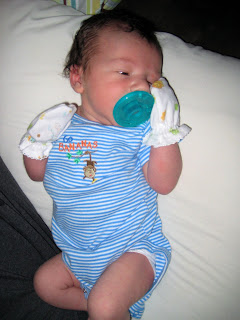 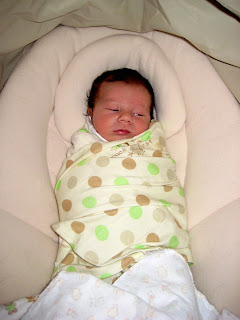 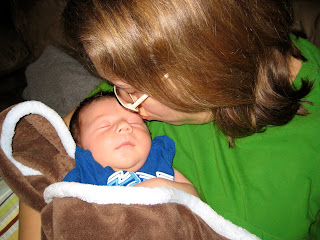 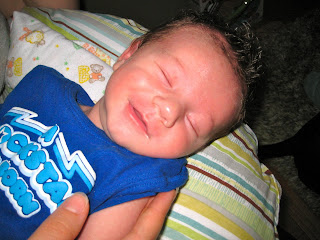 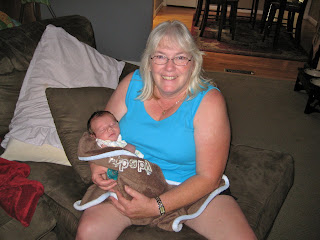 Lots of baby fun and a vote!

Saturday, June 13, 2009
So the baby is growing already! He smiled on day 4! I can't believe how in love with this kiddo I am! Here are some cute photos to update you on his fun at home!

Also, I am a finalist in the People's Choice award at nononsense.com. If you vote daily, you have a chance to win a $50 gift certificate. Vote often :) https://www.nononsense.com/PCA/Vote.aspx 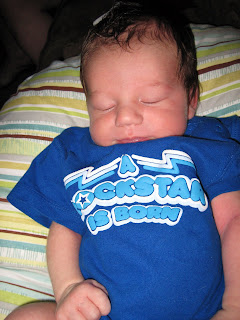 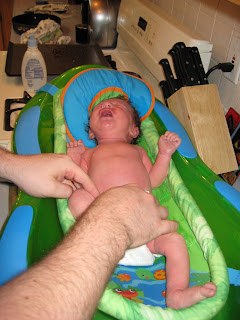 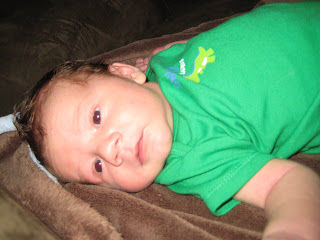 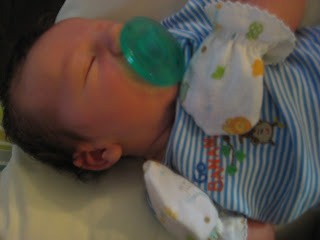 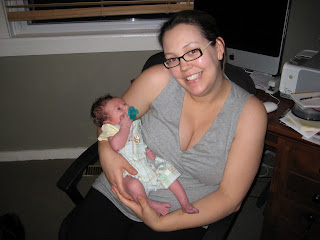 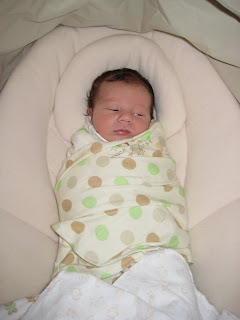 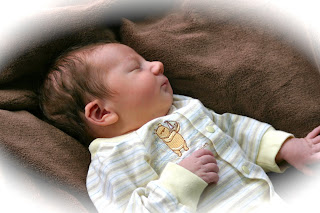 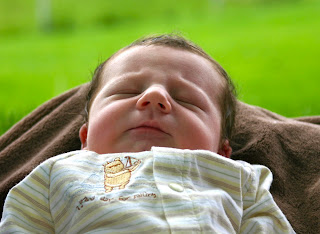 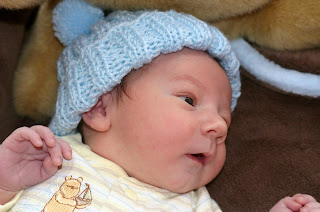 At 330 am I believed my water broke. We were admitted to Triage at 5:30am and they said that my water broke, too. (12 hours later, we realize that it was a slow leak and not actually broken!)

I was admitted to Labor Delivery Room #2. We were so ready for baby boy to arrive! It took three tries, but I did get an IV (yucky and ouch!) Thank goodness Jerret was there for me. I have some great bruises to account for hard to get veins.

Anyway, so they started me on Pitocin to make sure I delivered within 24 hours of my water breaking (or so we thought). The baby was low, but I was still not dilated past a one. Over the course of the next 12 hours, I labored through hard contractions on the labor ball, walking and just breathing. The nurses kept increasing the induction medicine, so the contractions were getting closer and stronger, but 12 long hours later I was still 1cm. I was tired and annoyed.

I had a few women visitors who wouldn't accept no for an answer. Ashley, Alice and Rena came in to visit while I was in labor. They each didnt stay long, but it was nice to see them. The whole family was in the waiting room---WAITING. I really didn't want them to wait....and it stressed me out a little knowing everyone was waiting on me.

The nurse asked again if I wanted the Epideral. I caved and decided to get the Epideral. It wasn't a walk in the park--and I was completely terrified, but it worked. The anethesist was super funny and made the setup and anxious time go by quick. The epideral was finished around 7pm.

The doctor on call visited and said we might have to discuss a c-section if I don't progress in the next few hours. She wanted to check to see how far along I was....STILL 1cm, but she noticed that my bag of water was still there! She hooked it and it officially broke! This was great news to all the nurses and Jerret and I! So, they told me to take a nap--and I did! Jerret and I slept so soundly for about 2 hours, until 9pm. We were checked at 9 and I was dialted to 4cm! This was amazing and exciting and I couldn't sleep anymore after that. We asked tons of questions to the nurses and got ready for the progressing birth. By 11pm, I was past 7cm and getting there. Jerret and I had time to talk about being parents and finally decided on a baby name in those wee hours of the morning!

At 3am, the nurse came in and announced we were going to "practice push." We actually never stopped practicing, and the doctor was called 45 minutes later. She arrived and stayed for about 15 minutes and Ephraim came out at 4:18am! No complications and not too much pushing time. Daddy Jerret helped keep mom focused on the contractions and pushing and then watched baby get cleaned up and took some pictures of the babe.

Mom and baby were allowed visitors within an hour and the family came rushing in. No one knew the baby's name yet--so we announced his name to the family that early morning. After the photos and everything, we waited for the Epideral to wear off and went to the postpartum room around 7am. I promptly ordered breakfast, but still couldn't eat very much. My stomach was too anxious and I got full immediately. (This was really sad for me--I didnt eat dinner the night before we went to the hospital and I was STARVING, having lived off of 4 popsicles through delivery).

I think that is all for the story! I'll post more photos very soon! Baby is learning to sleep a little more at night....maybe I will get to blog some more later. 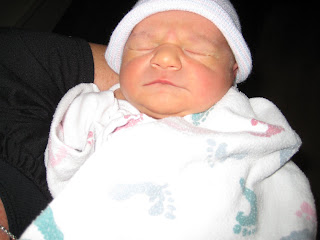 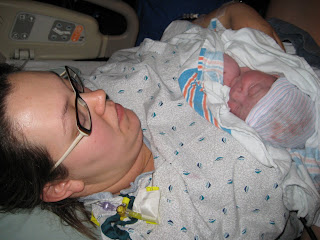 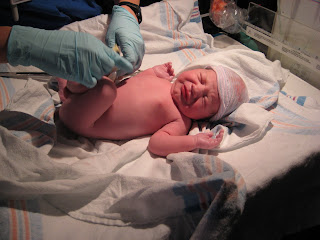 Looking good--trying to pickup the nurses! 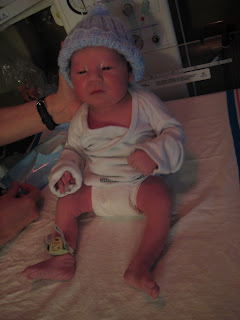 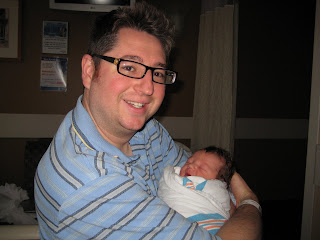 Daddy and baby
Posted by Stephanie at 7:33 PM 2 comments: 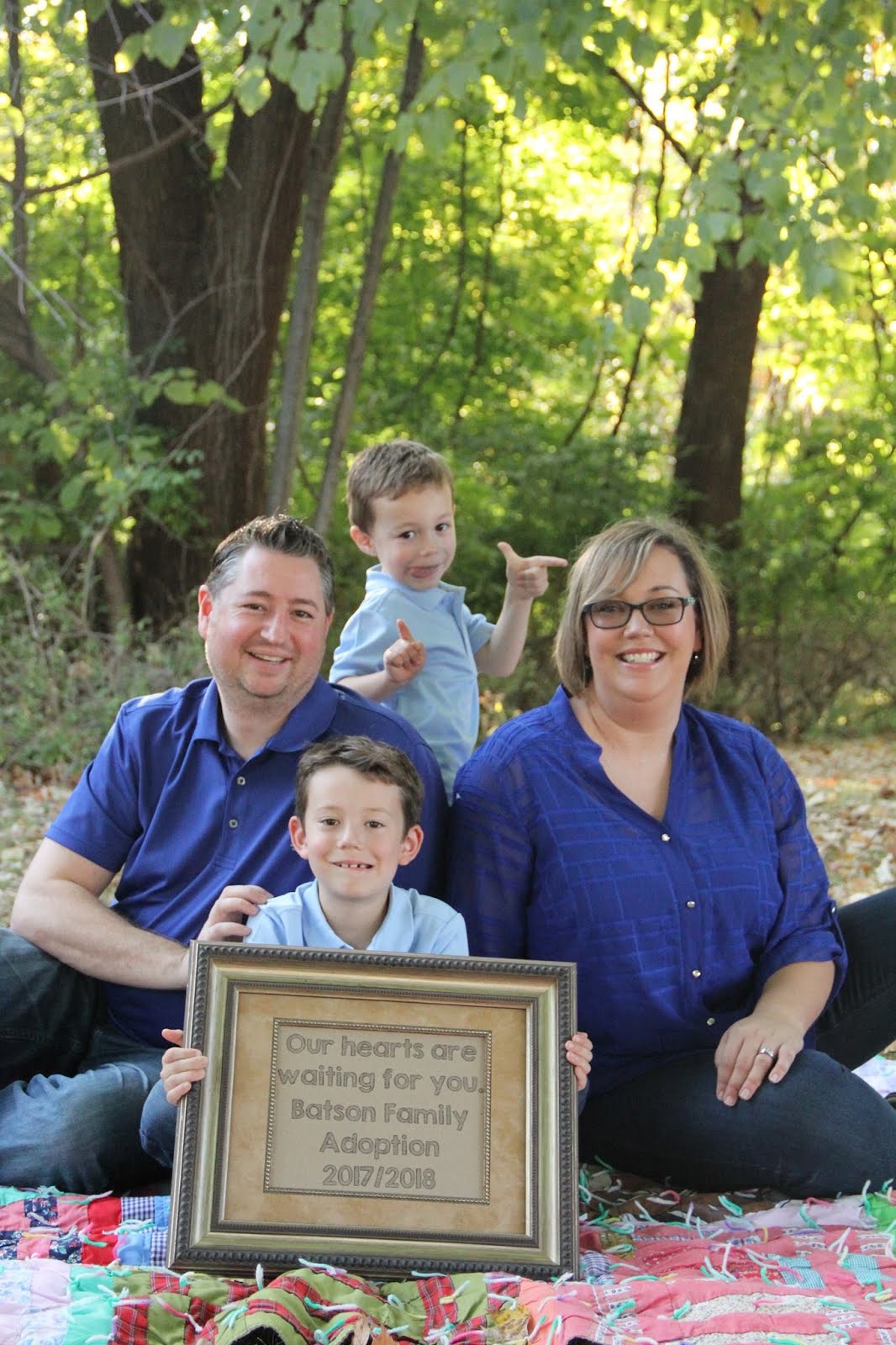